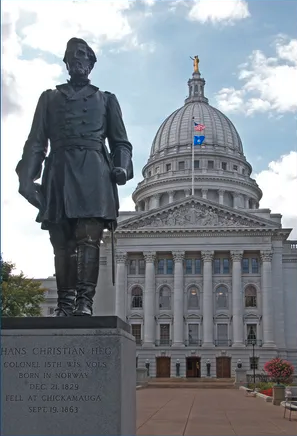 MADISON – During chaos at the Wisconsin State Capitol Tuesday night, protesters tore down two statues that have stood in front of the statehouse for decades — including one memorializing a Wisconsin abolitionist who died trying to end slavery during the Civil War.

Forward:About the statue torn down and dragged down State Street

In other cities, statues of Confederate soldiers and symbols have been destroyed by those protesting racial injustice. But in Madison, the statue of famed abolitionist Col. Hans Christian Heg was torn down and thrown into Madison’s Lake Monona late Tuesday night. It had stood in front of the Capitol since 1925.

Here is what you should know about the man who died fighting the Confederate army:

Heg was an immigrant who opposed slavery

Heg migrated to Waukesha County in Wisconsin from Norway in 1840. After two years in California during the Gold Rush of 1849, he returned to Wisconsin to care for his younger siblings and manage the family farm.

Heg soon entered local politics and joined the Free Soil Party, which was centered around opposing the expansion of slavery into the western United States.

He was also a leader of Wisconsin’s Wide Awakes, an anti-slave catcher militia
In 1859, Heg used his position as state prison commissioner to advocate for vocational training rather than the punishment of prisoners.

He fought against Confederate armies

Heg was appointed colonel of the 15th Wisconsin Infantry — a group consisting mostly of recent immigrants from Scandinavia — in the fall of 1861. He trained at Camp Randall in December and left for the South on March 2, 1862.

He defeated a number of Confederate armies in battles in Kentucky and Tennessee. On Dec. 30, 1862, Heg lost more than 100 men and had his horse shot out from under him. His general later called him “the bravest of the brave,” according to the Wisconsin Historical Society.

He died fighting for the Union

Outnumbered, Heg was leading a charge in front of his troops when he was shot in the abdomen. He died the next morning.

A triangular pyramid monument of 8-inch shells stacked 10 feet high marks the spot where Heg was mortally wounded, according to the National Park Service.
Share
0