Restoring symbols at a seat of unchecked power 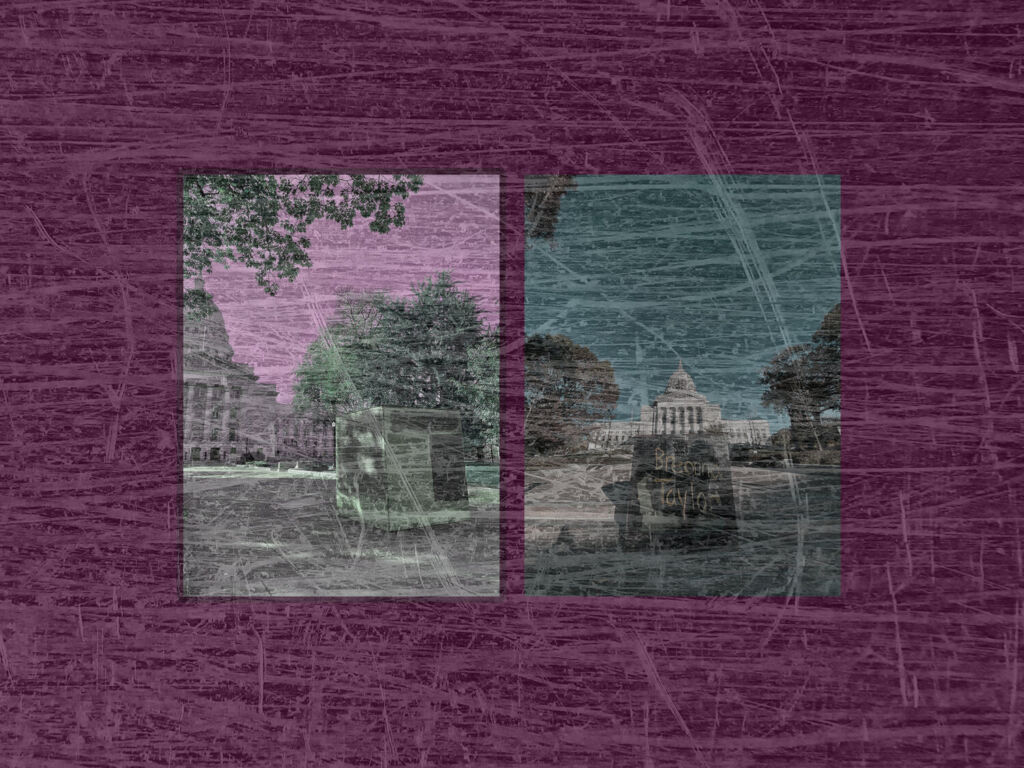 Illustration: Two photos of empty pedestals, taken after the statues of “Lady Forward” and Hans Christian Heg were pulled down at the Wisconsin Capitol, are layered into a field of dark reddish color and scratchy texture. Photos by Michael Doyle Olson, texture image via Robert Thomson on Flickr, illustration by Tone Madison.

We can debate the merits of symbols. It makes sense that people want government buildings decked out in symbols that remind them of democracy and progress. It makes sense that people cherish the Wisconsin Capitol. It’s a significant work of architecture and more innovative than it looks. Plus, through Madison’s trademark infuriating mix of pride and provinciality, no building in town is allowed to overshadow it.

Symbols are also cold comfort at the seat of Wisconsin’s state government. Inside our Capitol, Republican state legislators are currently pulling full-time salaries to stage hate rallies dressed up in Robert’s Rules, holding hearings on extreme, malevolent bills that have no chance of becoming law under a Democratic governor. Our state supreme court is setting itself up to adjudicate a rigged battle over redrawing the state’s brazenly gerrymandered legislative maps. The legislature doesn’t vote or debate on policy proposals unless Republicans are in lock-step behind them. A menacing and ambitious political insider, elected from one Assembly District, can single-handedly block the governor, elected in a statewide vote. The same person is using public funds to pay for a personal goon squad to whip up conspiracy theories about the 2020 election. No one actually believes the people’s business gets done in there.

The return of two statues to the Capitol grounds this month has rapturously transported some observers from this bitter reality. Celebrating the restoration of the Forward statue and a monument to Civil War Col. Hans Christian Heg and excoriating the protesters who pulled them down last summer, the Wisconsin State Journal‘s editorial board writes: “They stand for the resilience of our democracy. Mobs don’t get their way in Wisconsin. The people, through their elected representatives, determine how we move forward.”

These might be the most factually incorrect three sentences someone could put together at this moment in Wisconsin politics. Perhaps the person writing it got it mixed up with a child’s remedial civics homework. Mobs do get their way, especially the mobs that assemble at the Capitol to oppose COVID-19 protections, and the mobs across the country who cling to the fantasy that Joe Biden stole the election. They have subjected everyone else to a pandemic far longer and deadlier than it had to be, and a blazing feedback loop that will further destabilize our already vulnerable democratic processes. They’ve done so with the active support of elected Republicans. The mob-proofing is made of the mob.

More importantly, the organized right in Wisconsin gets its way, no matter who the people elect. An editorial board that has repeatedly and correctly called out gerrymandering (stopped clocks and all) should be able to keep that in mind. “The people” of the state writ large didn’t choose most of the people who wield actual control. A lot of those people chose themselves through the clever use of advanced mapping software, as the State Journal‘s editors damn well know. Say what you will about property destruction, but at least it’s an honest expression of anger that doesn’t try to convince you that all is well in a state some political scholars have determined is no longer a democracy. If you see something noble in these statues, politicians have done more to tarnish it in the past decade than protesters did in a few explosive nights.
As is so often the case in local commentary, the editorial’s conclusion is one thing—OK, be downright horny for some statues, I guess. The lazy, solipsistic path it takes there is far more objectionable. This piece shows little interest in demanding accountability from those with actual power, which is supposed to be a bedrock value of journalism. It overlooks some of the most glaring facts relative to the issues at hand. The State Journal‘s editors write that “the violence and destruction in Downtown Madison on June 23, 2020, did nothing to promote racial equality or an end to police brutality.” They don’t discuss how little those elected representatives—the ones who ultimately have the ability to make laws and set budgets—have done to promote racial equality or check police brutality over the past year. They just skip right to crowing about “the resilience of our democracy,” as if anything in state government is functioning the way it should. Like some unholy combination of Smithers, Salacious Crumb, and E.B. Farnum, they crawl mewling into the laps of their betters.
Some very watered-down police reforms have limped through the Legislatureand even into law, including a conditional (!) ban on chokeholds. It still allows cops to use chokeholds “in life-threatening situations or self-defense,” and in any case it won’t do much to change a deep-seated culture of violent impunity. The Legislature has refused to take up many other provisions, out of sheer political pettiness. Our elected officials’ single best tool for holding police accountable is to flex the power of the purse. If police “reformers” were sincere, they’d use the threat of funding cuts to give their reforms teeth. But the status quo of police funding has never really been in danger, and Republicans have even proposed punishing local governments that cut their police budgets.
You don’t even have to be a police abolitionist to see that there is a real debate to be had about police funding and the overall role and legitimacy of policing, the kind we’d certainly be having if EPA scientists or adjunct UW instructors were murdering people in broad daylight and calling this a necessary part of their jobs. The State Journal‘s editorial board is remarkably incurious about that debate. In their wisdom, these people praised the Madison Common Council last fall for increasing the Madison Police Department’s funding. In this latest editorial, it takes what police and prosecutors say as unquestioned truth.

A mob tore down the two statues — symbols of progress and sacrifice — on June 23, 2020, in a misguided attempt to protest a legitimate arrest. An unruly 29-year-old man had intimidated diners with a baseball bat and bullhorn inside a restaurant on the Square before struggling with police and fleeing a police car. The man pleaded guilty to disorderly conduct, resisting arrest, criminal damage to property and extortion.

This gives police and prosecutors too much control of the narrative. It ignores the true challenge of the moment—to think outside of the current criminal justice system and its logic of punishment. Wherever you stand in the complex debate over last summer’s protests (and regardless of how you feel about this person’s behavior and statements in particular), throwing the book at this person was not in the least bit constructive. There is no reason to turn allegedly “demanding food and beer” (something I’m sure thousands of belligerent drunk white people in this town have done without facing criminal charges) into a federal extortion case, except to make an example of someone. Yes, he pleaded guilty. If you have paid attention to problems in the criminal justice system at all, you know that a guilty plea from a poor, Black defendant is a loaded thing. Prosecutors have people over a barrel in this situation. A defendant can secure a reduced sentence and some certainty, or go to trial and risk spending years in prison.
It also takes a cold or downright sadistic mind to fault someone for struggling with a group of officers and fleeing from a squad car, especially in June of 2020. The entire world had just watched a police officer torture a man to death in the street for nine minutes, in broad daylight, all because someone accused him of spending a counterfeit $20 bill. Would you want to be in police custody? Or in jail or prison during a deadly pandemic? Would you trust the process? Trying to get away from the police is desperate and risky, but entirely rational. If you can’t see that, well, you are deeply lacking in necessary perspectives on all this. It’s worth noting that the State Journal recently “diversified” its editorial board by adding a cop, a downtown business booster, and a centrist judge. It sounds like the setup to a bad joke, and it is.

“Good statue, bad statue. I’m not interested in participating in that debate,” Mia Sato wrote for Tone Madison a week after the statues came down. Madison can always use a break from its navel-gazing (but not here on Tone Madison dot com!) and self-valorization. People who used the downing of the statues as an excuse to check out from the bigger debate here were going to find that excuse anyway. People can also take comfort in the return of a familiar landmark without turning it into a grotesque display of political numbness. People can get excited about plans for a Vel Phillips statue at the Capitol while also acknowledging what a complex statement that makes. A monument to a pioneering Black jurist and politician will sit outside a Capitol controlled by a racist cult. At opposite corners from a monument to a man who opposed slavery and died in the Civil War (as we are constantly reminded), but also wrote of one of his servants: “He seems to be a good N_____. I got him a pair of pants and he struts around as big as a Monkey.”
People can hold a space in their heart for “the people’s house” while also remembering that it’s a seat of power, that said power has made itself quite unaccountable to the people, and that its monuments are symbols of power more than they are symbols of anything else.
Share
0