re:mancipation is a collaborative project with the Chazen Museum of Art (University of Wisconsin-Madison), artist Sanford Biggers, and MASK Consortium, Inc.  The project will engage with a sculpture in the museum collection, “Emancipation Group,” by American sculptor Thomas Ball, which depicts Abraham Lincoln standing over a kneeling freed man.

Using the sculpture as its central focus, re:mancipation will seek to explore, dissect, and better understand racism in America. Final deliverables throughout the multi-year endeavor will include the creation of a new artwork by Biggers, a documentary about the project, both in- person and virtual exhibitions, the development of an extensive national symposium series, a specific toolkit and training for K-12 teachers around using this project as a vehicle for engaging with challenging topics in the classroom, and the production of supporting research, archival, and educational material.

Sanford Biggers will invoke his multidisciplinary concept band, Moon Medicin as part of this endeavor. 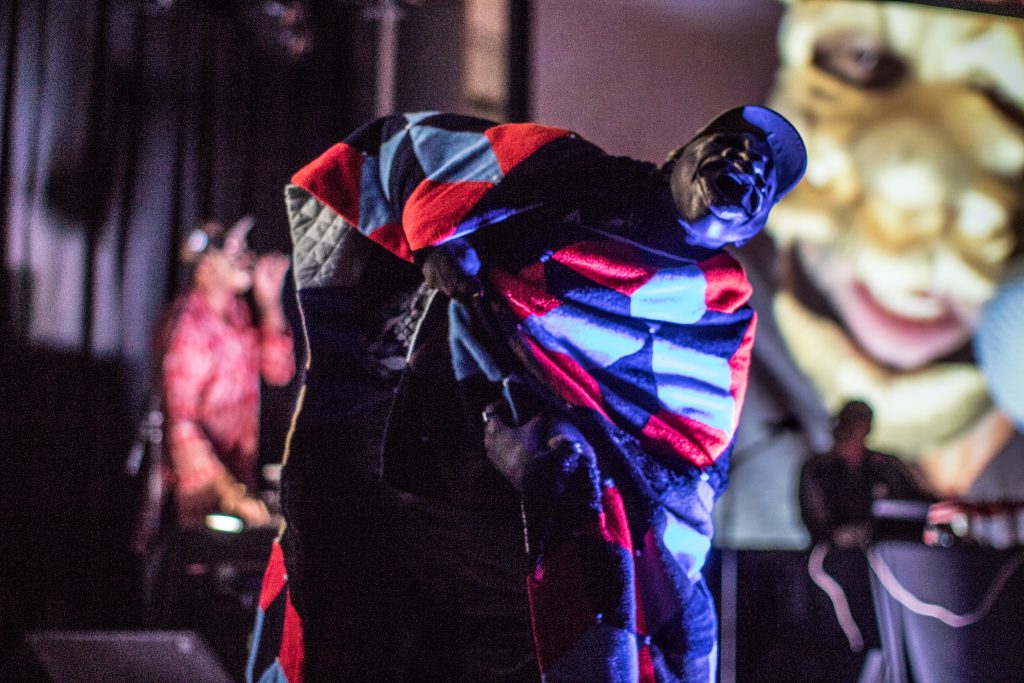 The workshop titled ‘Impeach The Precedent’ will land them in Gallery IV of the Chazen Museum of Art, where a marble edition of the controversial Emancipation Group sculpture has been installed since its acquisition by The University of Wisconsin’s museum in 1976 as a gift of Dr. Warren E. Gilson.  Biggers will conduct an audio, visual, performance art attack on institutional racism, seeking healing through understanding via Dance, Drums, Poetry, Song, Visual Art & Dialogue.
👁interactive view

Gallery IV & The Emancipation Group at The Chazen Museum of Art.

PROEJCT PARTICPANTS BACKGROUND:
The Chazen Museum of Art at the University of Wisconsin-Madison believes deeply in the power of art to inform, enlighten, and explore our shared history. UW also acknowledges the often complex and difficult past associated with works such as public monuments and their role in glorifying racism in America. Over the last several years the Chazen has developed a reputation for activating innovative new approaches to its collection, exhibition programming and outreach. One of the key elements of this approach is to partner with contemporary artists, campus colleagues and community stakeholders to better illuminate and understand, in new context, historical works in its collection. The re:mancipation project will be the most significant realization of this approach to date.

Moon Medicin is a multimedia concept band performing original compositions interspersed with re-imagined covers. The collective performs against a backdrop of curated sound effects and images of sci-fi, punk, sacred geometry, coded symbology, film noir, minstrels, world politics, and ceremonial dance.  Renowned visual artist Sanford Biggers is the creative director joined by a rotating cast of musicians, designers, and performance artists. this super-group of power-house musicians meet to spin tales from our Earth’s past, present, and future weaving symbolism allegory into an audio visual quilt.  Moon Medicin most recently possessed Biggers’ Oracle at Rockefeller Center in New York, bringing the 30ft Bronze Sculpture to life through interactive livestreams that were triggered by QR codes installed by the epic sculpture.  Grammy Award winning producer, vocalist, and bassist, Meshell Ndegeocello anonymously provided the voice and spirit of the Oracle as various guests, from cultural celebrities like The Roots’ Black Thought (Tariq Trotter), to random visitors to the Rockefeller Plaza, asked for guidance in future affairs.

Rich Medina is an elite international DJ who, in the twenty years since he spun his first record, has turned his young love for music into a celebrated career as a platinum-selling record producer, recording artist, poet, journalist, and Ivy League lecturer. From the legendary nine-year-run of his Lil’ Ricky’s Rib Shack party at APT in Manhattan’s Meatpacking District, to his globe-spanning, conscious-raising, dance-floor-shaking party Jump-N-Funk, a sonic tribute afrobeat and its iconic creator Fela Kuti, Rich stands without peer as a contemporary DJ of diverse range and taste. A sonic storyteller par excellence. But his art pushes past those boundaries. As a respected spoken word artist,he has performed on stages around the world, and his sonorousvoice has been utilized by everyone from EA Sports to Nike. He’s an intellectual and public speaker who has lectured at TEDXPhilly and his alma mater Cornell, amongst others. And he’s a producer of note, crafting work with a range of artists,including Jill Scott, J Dilla, and Bobbito Garcia. In short, Rich Medina is the modern-day renaissance man—an artist and visionary who has built a compelling narrative on his own terms. And his journey continues

Nuri Hazzard is an Actor, most recently featured in this year’s Super Bowl LVI ads, he has appeared in TV series such as Wu-Tang: An American Saga and Law & Order: Special Victims Unit.  Nuri will perform as a co host and CSRJ field correspondent, extracting the narratives from participating artists.

Sanford Biggers first received critical attention when his collaborative work with David Ellis, Mandala of the B-Bodhisattva II, was included in the exhibition Freestyle, curated by Thelma Golden at the Studio Museum of Harlem in 2001. Since then, his works have been presented internationally including at the Tate Modern in London, the RenaissanceSociety in Chicago, Prospect 1 in New Orleans and the Whitney Biennial, The Kitchen, and Performa 07 (curated by Roselee Goldberg) in New York. Mr. Biggers is affiliate faculty member at Virginia Commonwealth University’s department of Sculpture + Extended Media and was a visiting scholar at Harvard University’s VES Department in 2009. He was previously an assistant professor at Columbia University’s Visual Arts program.

Wildcat Ebony Brown:
Brooklyn-based emerging artist Wildcat Ebony Brown, began her career as a professional model in her early 20’s. Despite ample success in the beauty and entertainment industry, Ebony has found a new home for her talents, passions, and uninhibited creativity as an artist and clothing designer. Her journey from subject to architect has led to paintings, installations, and a developing clothing line. Grounded in her aptitude for color harmony, her work is vibrant and exhilarating. Her designs focus on a sophisticated, timeless silhouette, as well as, the comfort and confidence experienced by those wearing them.

Lynore Galore has created wearable art for Beyoncé, Missy Elliot, OutKast’s André 3000. She focuses on sourcing all her pieces from found and/or recycled components.  Lynore develops pieces with spiritual intent, often producing work after tarot consultations with her clients. Current work include collaboration with Sanford Biggers on his Moon Medicin and re:mancipation projects.

Keyon Harrold (born November 18, 1980) is an American jazz trumpeter, vocalist, songwriter, and producer. Keyon Harrold was born and raised in Ferguson, Missouri, United States, one of 16 children in a family of musicians. His grandfather was a former police officer who founded The Memorial Lancers Drum and Bugle Corps. Harrold graduated from the School of Jazz at The New School. He has performed with Snoop Dogg, Jay Z, Beyonce, Rihanna, Eminem, Maxwell, Robert Glasper & Gregory Porter

Pharaohe Monch: is an American rapper from South Jamaica, Queens, New York. He is known for his complex lyrics, intricate delivery, and internal and multisyllabic rhyme schemes. Monch compares writing and recording his lyrics to writing and filming a movie. His recent project is a heavy-rock-band th1rt3en.  His vocal delivery is inspired by Jazz music and musicians such as John Coltrane.

Janine Boldt – Curator at Chazen Museum of Art
Boldt received doctoral and masters degrees in American Studies from William and Mary in Williamsburg, Virginia. She has curated exhibitions at the American Philosophical Society and the Michigan Woman’s Historical Center and Hall of Fame, and secured fellowships with the Museum of Early Southern Decorative Arts, the Virginia Historical Society and the Colonial Williamsburg Foundation. She is currently authoring a book based on her dissertation titled The Politics of Portraiture in Colonial Virginia, and is also developing an interactive database based on her research.

Kacie Lucchini Butcher,
Kacie Lucchini Butcher is a public historian dedicated to building empathy, helping communities write their history, and to advancing social justice and social equity. She has worked in museums and for community organizations, helping communities reclaim their narratives through collaborative public history projects. She has experience engaging marginalized communities through historical partnerships, creating and sustaining community-centered archives, and producing historical research that foregrounds social justice. Kacie is the Director of The Public History Project and teaches History 401 at UWM.  13 of Kacie’s students have actively contributed responses to the Emancipation Group.